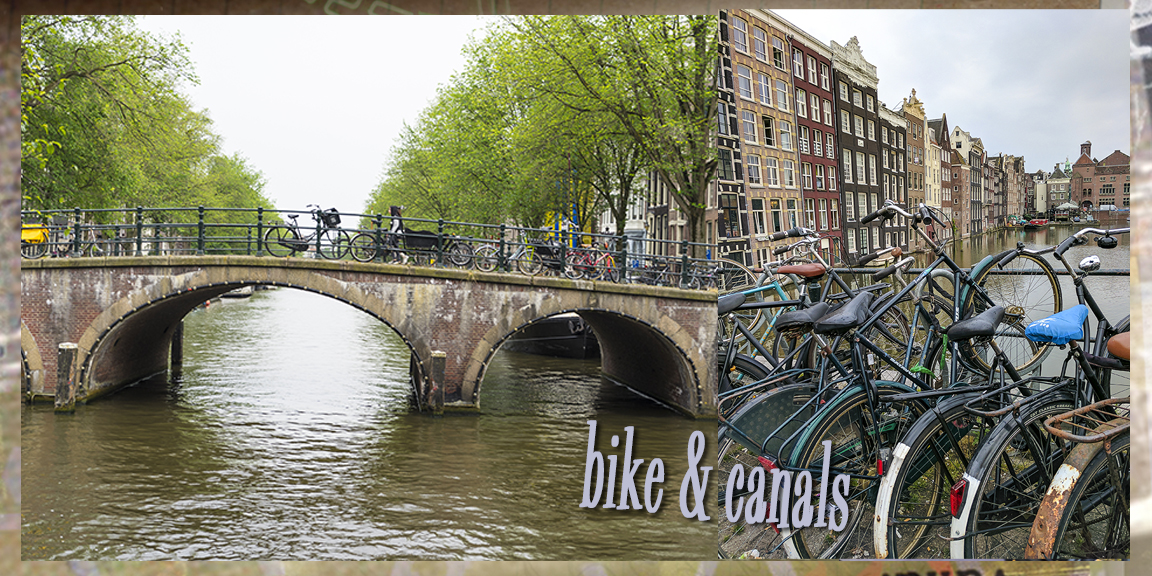 Bucket-list 60th birthday trip with photographer pal Chester Simpson began in Amsterdam. I loved this city and wish we had spent more time here. The first thing you notice in Amsterdam is that life revolves around the canals – boats – bikes- and cafes. I thought I would end up “bike roadkill” on a daily basis.

My favorite hotel was the Pulitzer located on Prinsengracht in the center of the action. Each room has a plaque with its history. Owner Peter Pulitzer joined 135 rooms to create higglety-pigglety hallways with charm beyond belief. I loved the Santal 33 Le Labo bath products in each room along with the Dutch waffle cookies I couldn’t stop eating.

Stewardess Barbie caught my eye in the window of an antique shop. I walked inside and couldn’t resist the tiny blue Delft Ware ceramic houses and started my collection. Created in the 1950s to be given as gifts for 1st class passengers on KLM Airlines, they originally had alcohol inside. A book 4 years in the making, tells the story of each real house with a photo of the ceramic house. I bought Mata Hari’s love nest #26. Born Margaretha Geertruida Macleod August 7, 1876 (D: Oct. 15, 1917), she was a Dutch exotic dancer and courtesan convicted of being a German spy during WW1 and executed by a firing squad in France.

Concentrated on the Oude Kerk, a nighttime stroll around the Red Light District is a must. Prostitution in Amsterdam dates back to the city’s emergence as a port in the 13th c. By 1478, prostitution was so widespread because of sailors flooding in, it had to be contained. Window prostitutes and seedy clubs are popular. It was not really what I expected. Located on one main canal lined with two streets of bars, clubs and yes, red-lit windows with scantily clad ladies. We are told not to take pictures but we snuck a few anyway (if the Russian bodyguards caught you they would toss your camera in the canal.) There are tight alleys off the main drag where the women are behind glass lit by black lights to make them appear more appealing. It actually makes them look more ghoulish and right in your face. Men appear and disappear inside each tiny room. Negotiations are made before they are allowed inside. Tourists gawk. Best Advice: explore once, it’s fun. We went back after my birthday dinner and it was creepy the second visit.

We got an Amsterdam Holland Pass to hit up the many world-class museums. The Rijksmuseum has an unrivaled collection of Dutch art. It opened in 1885 with over one million pieces, 8,000 are on display. The Museum district hangs Vermeer, Van Gogh, and Rembrandt. We stopped in when it was pouring down rain. Then the rain stopped and we decided to meander around the city instead of being inside a museum. Getting lost and exploring the city was the best part of the trip. Next visit, I plan to see all the museums.

In some ways, Amsterdam to me was all about Anne Frank. July 1942, 13-year-old Anne Frank, her family, and the Van Pels went into hiding at the rear end of her father’s factory warehouse in what was called The Secret Annex. Her last diary entry was August 1944, 3 days before being arrested and sent to a concentration camp. In March 1945, Anne Frank died at Bergen-Belson. She longed for Hollywood and glamorous life. A dreamer and ambitious person who knew in her heart she’d be published. Her diary has sold more than 30 million copies translated in 67 languages. She wrote in Dutch occasionally using German and English words. What I got out of the Anne Frank Museum and her diary was that she was an author discovering her voice during extreme diversity.

For 20 years, Rembrandt lived and worked in this house. He ran out of money and had to sell it. A distant relative of his was the tour guide. Displayed was his cabinet of curiosities that he drew from. Visiting his house was a unique way to experience this famous artist imagining his life from 1606-1669.

The quaint and quirky streets that straddle the grandest canal is De Negen Streetjes or The Nine Streets. Bursting with boutiques, cafes, designer shopping, and all-cool stuff. Located in the middle of the World Heritage Canal Belt (and near my hotel The Pulitzer) the 6 bigger streets refer to animal skins for leather industries: Reestraat, Huidenstraat, Wolvenstraat, Berenstraat, Hartenstraat, and Runstraat. Most buildings in this district date back to the 17th c.

I loved my short visit to Amsterdam and can’t wait to return.