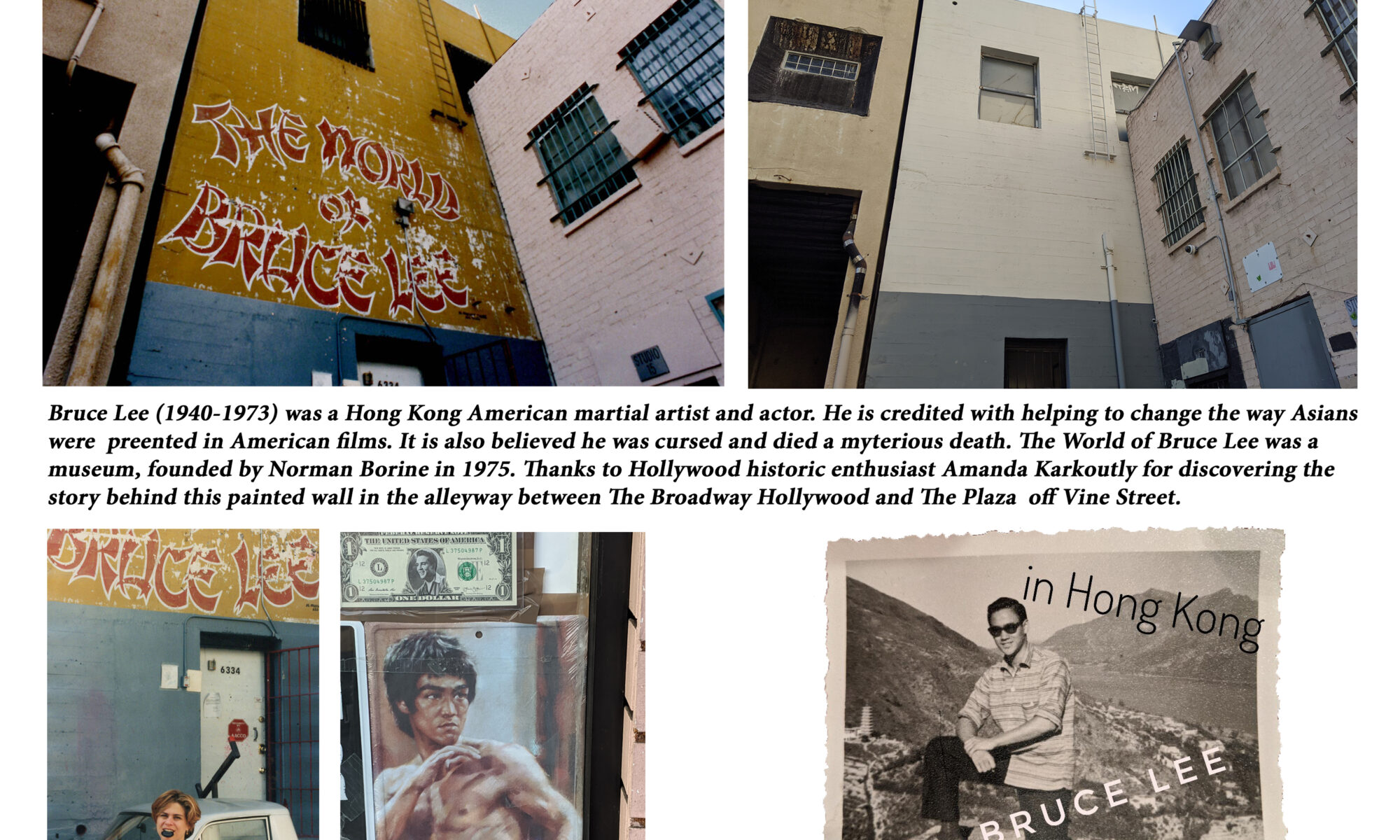 In 1991, with my camera in tow, I ran around Hollywood taking photos. Little did I know then that I would actually end up moving to the building by the alley where I would shoot the crumbling painted wall of The World of Bruce Lee. Little has changed over the decades. The two adjoining buildings in the alley remain the same yet have a different color of paint. Upon trying to figure out what The World of Bruce Lee was, I reached out to Hollywood expert Amanda Karkoutly (cahuengapast is her IG) to see if she could figure it out – and she did.

Amanda found a video of an event at the World of Bruce Lee Museum that shed light on the use of this building – https://www.youtube.com/watch?v=XFj2TNOS9x4

Bruce Lee was a legend in the world of martial arts as well as in films. “Enter the Dragon” in 1973 is one of his most iconic roles. In Feng Shui terms, we actually studied Bruce Lee’s BaZi or birth chart to see if he was in fact cursed and to determine if we could see why he died so young. Turns out, his fate was in his chart. There was a clash, a health issue, and a strange situation in his chart that couldn’t be explained –and frankly, I can’t recall now the exact details. I do remember there was a WOW and HUSH over the room for us to be able to see the date of someone playing out in their chart.

For now, that painted wall is a memory. For me, I see it every day as I leave through the valet in the alleyway. Sometimes it is quite ironic where we end up in life and who knew when I took those pictures in 1991 I would be living there one day. 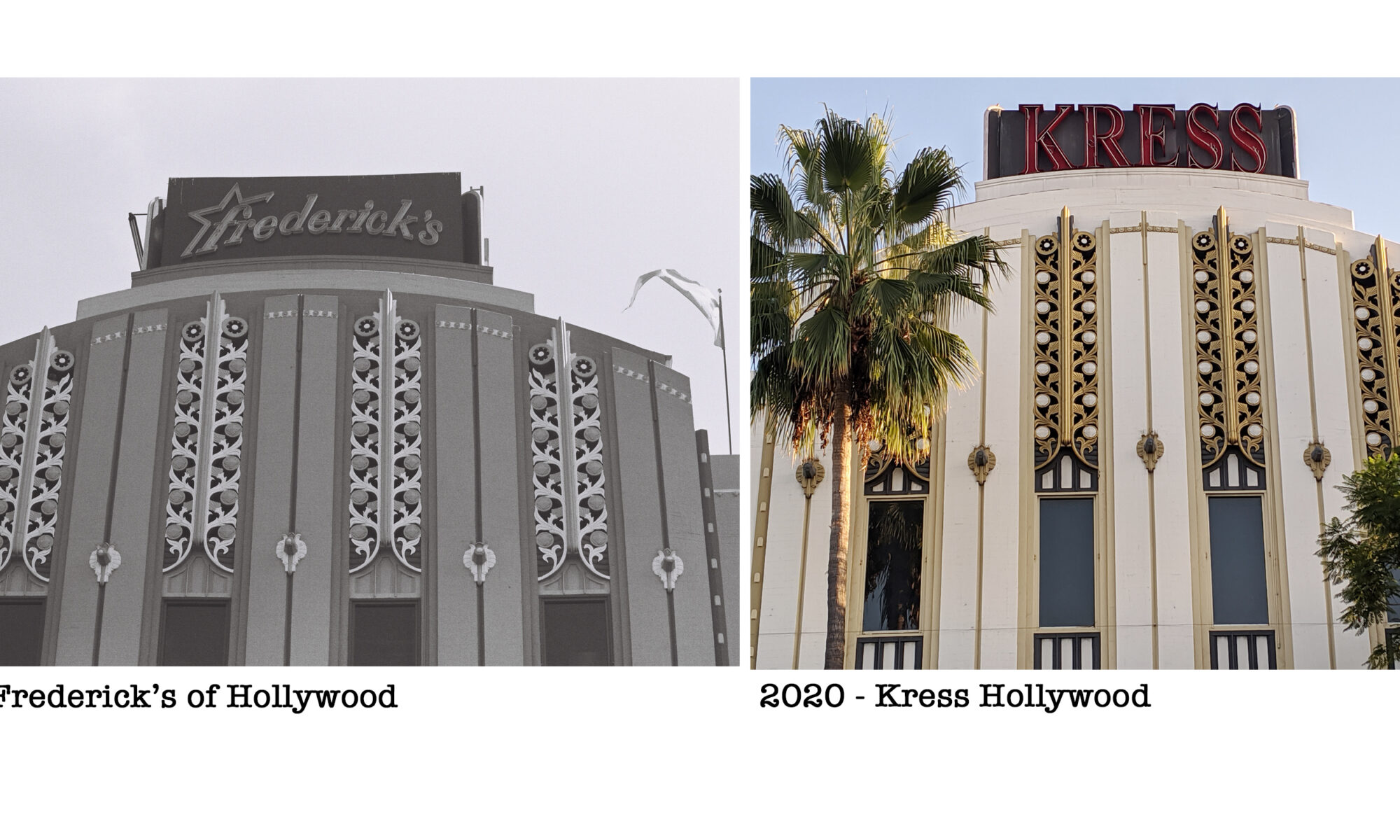 Back in 1991, the Kress building was still home to the famous Frederick’s of Hollywood. Hollywood writer Martin Turnball writes that the Kress department store opened in 1947 at 6608 Hollywood Boulevard.

Frederick Mellinger, whose big claim to fame was that he invented the push-up bra, opened his flagship store in the once fancy Kress department store –selling bras, panties, corsets, bedroom slippers, a vast array of hosiery, bridal lingerie, special occasion lingerie, and more.

Established by Samuel Henry Kress, which operated from 1896 to 1981, there were Kress stores with ornamented architecture on “Main Street” in hundreds of cities and towns. In 1934, S.H. Kress opened the department store on Hollywood Boulevard. In 2008, the new owners spent 30 million dollars to restore the historic art deco building. It had a nightclub and dining room that was quite fabulous.

Now it is sadly abandoned with drug dealers out front.

In 1999, I ventured around Hollywood and took some photos. Little did I know then I would move to Hollywood and live here for 40 years. I want to share a few of my THEN and NOW shots with you and add a bit of Hollywood history.

These photos were taken from the alley behind my building at The Broadway Hollywood located next-door to what was once the famous and glamorous Hollywood Plaza Hotel. Now it is a retirement building where the only action they get is weekly ambulances. Excitedly, I managed to capture the same palm trees from 30 years ago. This back area was once a swanky swimming pool where movie stars like Jackie Gleason, Doris Day, and Marilyn Monroe sunbathed. Bette David lived at the hotel with her mother when she first moved to Hollywood in 1930. Ava Gardner checked into the hotel in 1941 but was forced to move to the cheaper Wilcox Hotel. Frank Sinatra frequented the barbershop in the basement. And George Burns had an office in the 1930s. From episodes of “I Love Lucy” you can see the building from Lucy’s flat.

The building and its neon signboard were designated Los Angeles Historic-Cultural Monument No. 665 on September 29, 1999 – however it is difficult to see the starry sign behind a tacky new billboard that went up on the roof.