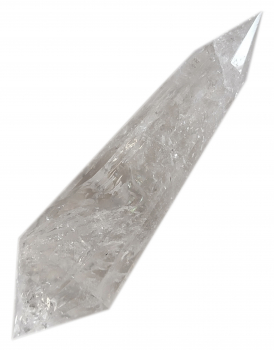 Specifically cut VOGEL QUARTZ crystals are amplifiers and energy gatherers. Over the years at the various shows, I saw Vogel Crystals and they are always super expensive. Not understanding enough about them, I avoided adding them to my Good Karma Shop. On this last trip crystal shopping in Tucson with jewelry designer, Nicole Foos, I took a serious second look. When we found an amazing vendor of high-quality pieces and Nicole bought two smaller Vogels for jewelry --I decided to take the plunge and pick up the two larger pieces. For anyone serious about their crystal collection --I suggest adding a high-vibrational Vogel.

Marcel Vogel was a scientist working at IBM in San Jose who became interested in various theories of quartz crystals and other occult and esoteric fields of study. The Vogel Crystal type cut was created by him. It is said it came to him in a dream. In Vogel's vision of sacred geometry, he saw the Talmudic Tree of Life in geometric form, which he felt was a little strange since he wasn’t Jewish. But he still managed to grab a notepad and draw diagrams from the vision. This led to Marcel spending the next year in the laboratory making his first crystal cut, based on the geometric shape he held with his vision. There is a lot of research you can do to further your knowledge of the Vogel cut.

"Marcel Vogel sought to use the power of science and of the lapidary arts to perfect crystalline forms of nature in order to maximize their potential for receiving, amplifying, and transmitting Universal Life Force Energy charged with the intent to heal and with the force of love. Vogel cut his crystals to harmonize with the natural quartz structure to enhance the energetic properties of the wand for healing purposes, and the result is also aesthetically pleasing."

The Vogel pieces I chose have dazzling inclusions and imperfections. There is a rainbow glistening in each piece. The Vogel crystal is complex and fascinating.

Currently there are no reviews for this product. Share your opinion with others, be the first to write a review.